How I learned to love Google Images


I have a fairly good visual memory and I’m pretty good at describing things, I think, which is handy for a writer. But in order to visualize and describe them, I’ve got to see them first. For someone whose genre is historical fiction, this can be tricky. Thank goodness for the wonders of the Internet and a good search engine.

Much of the time, I’m researching some specific thing, like what a Charleville 1717 musket looked like. Sometimes, an article online will include an illustration which intrigues me and leads me to other resources. Paintings from the period I’m writing about (the early to mid-1700s) are rich sources of inspiration. When I was writing my first novel, An Unsuitable Duchess, I looked for portraits from that era to see what people were wearing. By the second, Most Secret, I had discovered the DVD version of John Rocque’s 1746 map of London, which led to searching for images of Somerset House, the various squares, schooners, and a suitable place for Jane Stowe’s uncle to live. 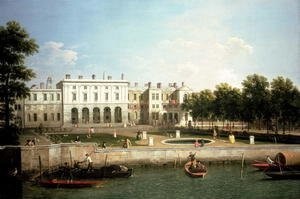 Above, Canaletto's drawing of Old Somerset House, used at the time for a variety of small government offices, storage, and even some lodgings for government employees, provided a place for the anonymous intelligence service in Most Secret.

With my third, Captain Easterday’s Bargain, I went looking for images of the Pool of London and the Thames generally in the early 18th century and found a treasure trove.

And I needed a place for Olivia, the embattled shipping company owner, to live. I settled on Well Close Square as being slightly down-at-heels, in the right part of London, and having a magistrate's court that would be useful. The photograph below was taken in the 1960s, before the square's demolition. 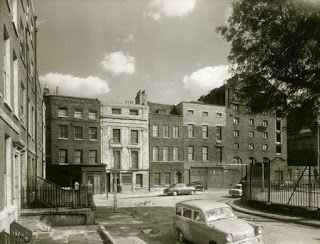 In my fourth, A Masked Earl, which I hope will be out by  early autumn of 2019, I found floor plans for both city and country houses,  as well as furniture and tea sets.

And finally, a painting of tric-trac players which oozes romance…or possibly lust. I consider this virtually emblematic of the romance genre. You know they aren't talking about a dumb board game.

Posted by Kathleen Buckley at 7:02 AM