How do you write a novel? Part I

I see a lot of questions from aspiring writers.  One of them is : "I want to write a novel. How do I do it?" There are many variants of this question, and most writers who have actually produced at least one novel probably sigh or wince and wonder how to answer.

How do you write a novel?

Answer:
Ideally, you've laid the foundation by reading compulsively since you learned to read, and picked up a wide vocabulary, a good grasp of grammar, punctuation, and a feel for language.

In addition, you have a strong desire to write, not for money or fame, but simply to tell a story.

You should also have already acquired the ability to string words together into coherent English (or whatever your native language is) so you don't write a sentence like this: "In the olden times, the men of Xablonia lay with the Chocolans' long dead grandmothers." What's wrong with that, you ask?

Well, you've just accused the Xablonians of necrophilia, and not even fresh necrophilia. And maybe that's what you meant, because sometimes things get weird in fantasy or paranormal novels. But if you mean that the ancestors of the current Xablonians lay with the ancestresses of the current Chocolans, you need to change that sentence. Many, many years ago, I read a very similar statement in a book blurb and I haven't stopped laughing since.

You could write: "In the olden times, the men of Xablonia lay with the Chocolans' ancestresses." You could write it in a number of other ways to remove the suggestion of necrophilia with the mouldering corpses of grandmothers. The point here is, you have to know how to write a sentence that says what you mean, not something entirely different.

Now that you have the mental tools to write a novel, you have a choice: either start by outlining the plot in some detail, or else (assuming you have even the germ of an idea of what it's going to be about) just sit down and start writing. Some writers are "plotters", some are "seat-of-the-pantsers". I'm the latter. I'd never write a book if I had to outline it first.

You are now beginning to write. Do what you have to do to carve out a block of time to write. Sit down at...well, whatever equipment you write with, be it desktop computer, some newfangled portable thing, or a ream of paper and a pen, and write. Do it regularly. Do not be distracted by social media, phone calls, or emails. Do not worry about who will publish it, how to promote it, how much money it will make (or not!), and who you want for the starring roles in the movie and what you'll wear to the premiere. Personally, I'd like one of my novels turned into a BBC mini-series but that's not going to happen, either.

Write your novel. You'll know fairly quickly if writing long fiction is your cup of tea.

If you finish it, that's still not the end of the project. My next blog entry will address what happens after you type "The End".

My fourth historical romance, A Masked Earl, will be released on October 2, 2019. 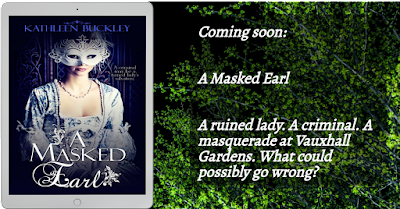 Posted by Kathleen Buckley at 5:29 AM