Most Secret: a romance of the Jacobite Rebellion

My second historical romance, Most Secret, will be released on May 28, 2018. It’s set in late summer of 1745, when the Young Pretender is gathering his army in Scotland. 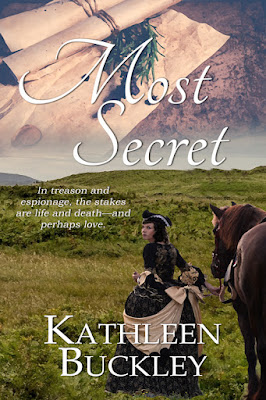 I’ve visited Scotland. I liked it and the people, though I am dubious about haggis. I visited Culloden. I sympathize with the Jacobites for a whole menu of reasons. The choice of George I, approximately number 50 in line for the British throne on Queen Anne’s death, was not popular even with all the English. There are many novels out there told from the Jacobite point of view, with Diana Gabaldon’s Outlander series (which I love) at the head of the list.
I thought it was time someone reported from the other side. But Most Secret is not a serious study of England’s preparation for the Scottish invasion. In fact, it’s more humorous than not.

“Forgive me for accosting you in the street, but there were reasons I could not call upon you at your home. Quite apart from the impropriety of a strange man visiting an unmarried lady,” he added.
“Are you a strange man?” The question popped out before she could stop it; something about him made her want to smile.
“So I’m told. May I carry your basket so I appear to have a legitimate reason to walk with you?”
“You can’t simply go up to a respectable female and…and…” Words failed her.
“Yes, I can. Besides, we were introduced by Lady Montfort.”
“Were we? I don’t recall it.” She would have. This outrageous creature was quite unlike the punctilious men she was accustomed to meet.
He smiled. “Alex Gordon, at your service. I am not surprised you have forgotten my presence as well as my name, considering the crush of guests at that affair—and so ill-assorted, too—”
“Were you one of them?” She failed to suppress a smile, for the Montforts’ invitations tended to be rather indiscriminate, and Lady Montfort did have some very odd relatives.


Posted by Kathleen Buckley at 9:59 AM No comments:

My first historical romance novel, An Unsuitable Duchess, has been nominated for InD’tale Magazine’s  2018 RONE Award in the 17th century to Regency historical category. Voting takes place May 14 to 20, 2018; you must be registered on www.indtale.com in order to vote. Once you register, you must click the verification link sent to you via email. 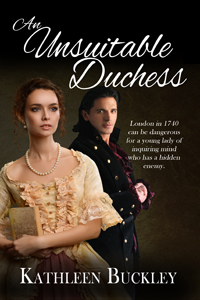 Posted by Kathleen Buckley at 5:55 AM No comments: