A writer friend uses the term “barnyard” to describe what W.S. Gilbert (of Gilbert and Sullivan) called “… corroborative detail, intended to give artistic verisimilitude to an otherwise bald and unconvincing narrative.” Don’t give your reader a passive, one dimensional picture of animals standing in the barnyard. Give them a sense of the smell, the flies buzzing around, the cows chewing their cud, the chickens scratching the dirt and pecking at bugs. It’s easy to do, if you’ve spent any time around barns, cows, and chickens, isn’t it?

What if you have no experience of living on a farm but still need to describe one?

Over the years, I’ve read a lot of historical novels and romance novels set in other periods. Since beginning to write historical romance myself, I’ve become an enthusiast (in the 18th century sense) about doing research. It’s not enough to know that ladies wore long dresses.  You can give the generic Regency novel description of the heroine’s gown: high-waisted, short, puffed sleeves, low at the bodice, a flounce around the hem. You can skip mentioning what she wears to go walking, or what her shoes, reticule, shawl and hat look like, if you wish.  It’s a little bare-bones but you can scrape by.

But “Sir Marmaduke strode down the street” with no description of his surroundings is disappointing. If he’s going to his club, where is it located? What does he see and smell? Horse droppings, probably, if it’s a warm day, perhaps the aroma of chocolate from a chocolate house. Does he hear street vendors crying their wares? Pass a confectionery shop? What's in the window? Hint: in the 18th century, it won't be fudge or peanut brittle. How far is it to his club? If he‘s oblivious to his surroundings because he’s on his way to challenge Sir Ecklemore, the reader should still be aware of what Sir Marmaduke doesn’t notice.

Can you simply make stuff up? Many years ago, at Bouchercon, the big mystery convention, a woman asked why she couldn’t “make up” a gun for her character. Well, heck, no! Would you “make up” a car? The real thing is available and more convincing than that loosely-described thing you invented to save effort.  So why do it, when you can get it right with even minimal research?

Now, thanks to the Internet and Google, it’s easy to do enough research to get the authentic touches that provide gritty realism. No, you probably won’t be able to pinpoint a confectioner or wig shop on High Holborn in 1745, but you will know what one looked like, both inside and out, and what they sold. The hard part of research now is not getting access to material. It’s realizing that you don’t know how an 18th century city lighted its streets (if it did!) or how people ate before everything became available all year, thanks to modern transportation.

My published novel, An Unsuitable Duchess, and the one I recently completed, are set in 1740s England, so I have a trove of references specific to that era. However, there’s plenty of information available online for virtually any period in the last ten centuries or so.

What do you need to know in order to bring your setting alive and make it believable to the reader?

Clothing and hair styles: what do your characters wear?
This is easy. From the Renaissance on, people who could afford portraits, had them painted. In some countries and eras, “genre paintings” (i.e., pictures of peasant weddings, market place scenes and the like) were popular.

Google Images: You will fall face-down on your keyboard before you exhaust Google Images. You’ll have to sift through things that are not relevant but it’s well worthwhile. If you Googled “American Civil War portraits” you would get many photographs as well as actual portraits, the invention of the camera having made portrait photography an option.  Search “American portraits 1860--1865” and you get fewer military photos and more painted portraits (and more women and children).

Pinterest: Good for period clothing and too many other things to list. Caveat: some pinners are careless about dating and attributing their Pins. I usually rely only on posts with a link back to a museum website, or some authoritative blog. All right, a little compulsive.  Also, bear in mind that a source from your period is preferable to someone’s possibly hypothetical or inaccurate recreated garment or coiffure. 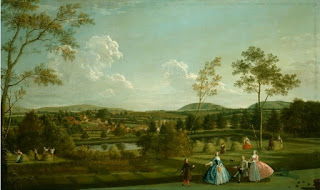 Location: What kind of house do your characters live in? What is the countryside like? What do they see in the streets? How far is Pall Mall from St. Paul’s?

National Library of Scotland (includes some of Great Britain): http://maps.nls.uk/geo/find/#  A little hard to navigate but a useful source.

Remarks on London: Being an Exact Survey of the Cities of London and Westminster ... by William Stow (1722) Some of the same information as The London Guide but includes a street directory ("New Leg Court, in Peter Street, W[estminster]"), list of post offices, churches and times of services, market towns and fairs, and the days stage coaches and carriers to various towns leave from which inns. Available as a print-on-demand book.

A Trip from St. James’s to the Royal Exchange (1744) Satirical essays. Available as a print-on-demand book.

Google Earth can also be useful.

Again, Google Images: Period landscape paintings, etchings, drawings and photographs of buildings, many of them done in your story’s time period (depending on when it is, of course). Toward the end of the 19th century, London urban renewed out of existence a number of buildings dating to the 16th, 17th, and 18th centuries (the houses on Wych Street and several coaching inns, among other structures). Thanks to the relatively new art of photography, we have a record of them.

Online Etymology Dictionary:  http://www.etymonline.com/ Look up a word or phrase to find its earliest occurrence. The first use of “sexy” occurred in 1905, but it was not used to mean “sexually attractive” until 1923. And “arsonist” was not a word until 1864, although “arson” dates to the 1670’s.

N. Bailey’s Universal Etymological Dictionary (1721). Some words have changed their meanings in the last 300 years. Available as a print-on-demand book.

Miscellaneous useful material: How do they travel? What do they eat? How do they address characters with titles? What do they read? What plays do they see? What’s happening in their world (apart from their all-consuming romance)?
Correct forms of address (English; everything you need to know about how to address a nobleman/noblewoman and their various offpring): http://www.hmsrichmond.org/avast/titles12.html

There are other sources for newspapers and magazines but they tend to be hit-or-miss. Search on Google for publications for the location and century you want.

Google Books: Many books that would be impossible to find in print are available for free on Google Books. Search Google for the topic you want—“1745 rebellion” for example. If you want to see what your characters should be eating, Google Books includes a variety of early printed cookbooks. Don’t overlook the popular fiction of your period.

Reenactment/living history groups: These can be a useful resource.  So can various other groups, like the ones which enjoy black powder shooting (i.e., flintlock pistols and muskets). It would be embarrassing to have your hero fire a flintlock repeatedly without having to reload after each shot.

Wikipedia: Wikipedia excels as a resource for sources. Use the list of references at the end of each article. Most of the articles are probably right about basic facts (“In 1492, Columbus sailed the ocean blue …”) but it’s best to go to the source material.

There are some things you won’t be able to find out, or not without investing a great deal of time. I never learned what the inside of a small 18th century schooner looked like. I found out that a small one would have two masts and how it would be rigged, that it would have a crew of five or six, and what they ate, but only a couple of rough plans of the below-deck area—and one of those plans was obviously mis-labelled. So I studied pictures of the living quarters of other kinds of 18th and 19th century sailing ships, and pieced together a description from those.

Finally, for enjoyable and informative reading, I recommend Medieval Underpants and Other Blunders: A Writer’s (and Editor’s) Guide to Keeping Historical Fiction Free of Anachronisms, Errors and Myths, by Susanne Alleyn. The cringe-worthy examples she cites (cigars in medieval England? Really?) serve as a reminder about the importance of checking our facts.

Posted by Kathleen Buckley at 4:30 AM 8 comments:

Giveaway sweepstakes for my novel, An Unsuitable Duchess

For a chance at winning a free e-book of my novel, An Unsuitable Duchess, visit the Amazon giveaway site: https://giveaway.amazon.com/p/cdc558e89e780194

Best summed up as: 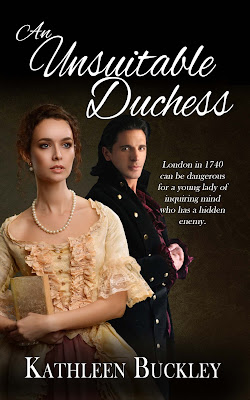 Read more »
Posted by Kathleen Buckley at 6:16 AM No comments: