Time Travel, Thanks to the Internet

Because I write historical romances, I do a lot of time traveling, specifically to the 1740s. As I usually do it via Google, I’m spared the experience of necessary houses (what we would call outhouses), terrifying medical care, and the soot-laden and reeking air of London.

If you write fiction set in the U.S. in modern times, you don’t need to describe a McDonald’s in detail: every sighted person in America has seen one. But when you write historical fiction, you can’t rely on your reader knowing what a coaching inn or a London wharf or a coffee house looked like. It’s my responsibility to describe it so the reader can see it.

In order to do so, I have to have a clear mental image of what I’m describing. I can’t be content with an offhand “It was a typical brick and half-timbered house of the Tudor period.” So Google is my friend. Searches will turn up pictures of the 18th century French Charleville musket (several different models), jewelry, clothing, furniture and floor plans of the period, the rules of card games no one has played in the last two hundred years, and virtually anything else I need to research. And it’s fun.


Let’s set the mood. Above is the image that symbolizes romance to me. You know this couple is not thinking about their stupid board game.

And this man, though a little late for my period, is the quintessential romantic hero: handsome and brooding.


On to specifics. In my second novel, Most Secret, Wych Street, near Drury Lane, inspired Markham’s house. In the photograph at the left, the spire of St. Clement Danes Church is visible in the background. The Oxford Arms coaching inn, below center, was the one at which Jane Stowe arrived after her stay in the country.

Both landmarks were urban-renewed out of existence in the late 19th century. Fortunately, someone photographed them before they vanished, and now they have been immortalized on the Internet.


Old Somerset House served as the site for the anonymous intelligence agency in Most Secret: by 1745 it was used for a variety of purposes, including grace and favor apartments, housing for minor government offices, and storage, making it the perfect headquarters for a small, secretive government department.

Paintings by Canaletto and Samuel Scott set the scene for Captain Easterday’s Bargain, with its story centered on the Pool of London’s shipping industry.

I particularly like this Samuel Scott painting, traditionally said to be of Custom House Quay. More recent thought is that it's actually the East India quay. However, the scene and activity must have been similar, judging by other pictures of the Custom House.

Canaletto did a number of paintings of the Thames and riverside buildings while he was in England. "Canaletto" seems an unusually suitable name.  His painting of the Lord Mayor's Procession, 1748, while interesting for the Lord Mayor's Barge, was more useful to me for the view of the shoreline with its ramshackle warehouses and sheds. 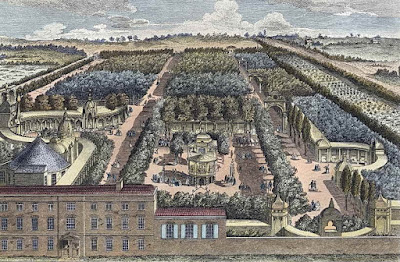 I used mid-18th century illustrations of Vauxhall Gardens for Olivia’s visit to that 18th century equivalent of Disneyland. For the ridotto at the Haymarket theater Haymarket, I found Giuseppe Grissoni's painting of a masquerade at the Haymarket. From a floor plan of the theater and contemporary descriptions, the scene appears to be the Long Room.

Contemporary illustrations and descriptions of coffee houses yielded details for Job’s, John Barlicorn’s unofficial office, from my upcoming novel, A Masked Earl (no release date yet but I’m hoping for late summer or early autumn).

And that’s just the paintings,  drawings, and plans. Project Gutenberg and Google Play contributed hard-to-find books, including cookbooks and works on 18th century commerce and agriculture, and a collection of early 18th century graffiti from bog houses (yet another term for the “necessary”). And on YouTube, after hours of research, I found an excellent video of a reproduction flintlock pistol being fired. It enabled me to time the interval between ignition of the priming charge and the main charge, a detail I used in Most Secret.

Posted by Kathleen Buckley at 4:56 PM No comments: